Last week we presented the story of the Hill, in Grosse Pointe Farms. Located on Kercheval Avenue running from Muir Road to Fisher Road, the small crest of land includes offices, shops, restaurants, and the main branch of the Grosse Pointe Public Library. For over 90 years, this prestigious three-block commercial center has been home to many elite stores and businesses.

It appears the origins of The Bronze Door began in the 1930’s. During this era the “uptown” area of the Hill was beginning to expand. On the corner, opposite Muir Road, Joseph Vansinamee had opened a beer garden, known as the Punch and Judy bar, in a small building on the space that is now the location of The Bronze Door. Mr. Vansinamee had previously run an establishment called The Pines for several years, along with several speakeasy’s – one was near his house on Rivard, a further one was on Ridge Rd, there was one on Muir, and one in the 700 block of Neff. When Prohibition ended in 1933, he opened his beer garden, on the Hill. By the 1940’s the Punch and Judy bar was owned by John Hume, it was then known as the Pointe Bar and proved a popular location. In an article titled “Avenue of the Elite”, by Madeline McLaughlin – Heritage magazine (1985), it is reported ‘a canteen was set up in the beer garden of the Pointe Bar. There, Mrs. Anderson, a volunteer, established the “Sunshine Club” to entertain visiting servicemen and those home on leave’.

Towards the latter end of the 1940’s it is reported the Pointe Bar was purchased by veteran Detroit restauranteur Al Green, who already had several successful establishments. Upon purchasing the bar, Mr. Green gave it an elegant brick façade and renamed it Al Green’s London East. As reported in Heritage magazine (1985), ‘he had no doubt that the new restaurant would be as prosperous as his others. However, his opinion was altered soon after he opened the doors to a very sparse crowd. It took very little time for Al Green to watch his dreams go up in smoke – financially and literally’.

Over the years the restaurant/bar changed hands several times. By the early 1960’s the establishment, now a fine restaurant, was called On The Hill. Then, in 1965, the restaurant was renamed The Bronze Door. The name came from the beautiful Renaissance bronze door in the foyer. From an article in the Grosse Pointe News (April 1965), we understand ‘it was decided, by the owners of the restaurant, to change the name to The Bronze Door because the previous name, On The Hill, applied to all the establishments in this particular area and created an element of confusion’. Coinciding with the change in name was a significant change to the menu, the wine list, and the opening hours – the new restaurant would open every day except Sunday. Images courtesy of: The Grosse Pointe News (1965 and 1966). 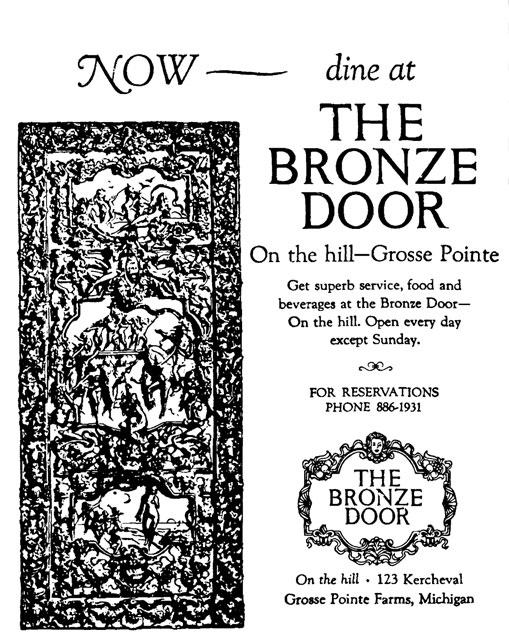 In 1976, The Bronze Door was under new management, and its name was changed to Charlie Pappas’. From an article in the Grosse Pointe News, 1976, it appears the nature of the restaurant was changed significantly, moving to a moderately-priced menu to suit everyone’s taste. However, the daily specialty items that had gained such popularity with Bronze Door customers throughout the year were reportedly retained. It is also reported ‘the interior of Charlie Pappas’ was redecorated to create a trio of rooms, each with its very own distinctive personality, including a bar, an “intimate library”, and the main dining room.

By July 1981, Charlie Pappas’ had been vacant for nearly three years. It was reported local businessman Anthony Mangiarelli and his business partner (a master chef from New Jersey) were to purchase the establishment and open an Italian restaurant. Mangiarelli had described the property as a “total disaster”, and it would undergo a complete renovation. Mangiarelli was reportedly ‘aware of the location’s history and wasn’t scared off by the lack of success by the former owners’. The tentative new name was ‘Anthony’s On The Hill’. Source: Grosse Pointe News, 1981. However, it appears Mr. Mangiarelli reverted to the restaurants former name, The Bronze Door. Image courtesy of: The Grosse Pointe News (1982). 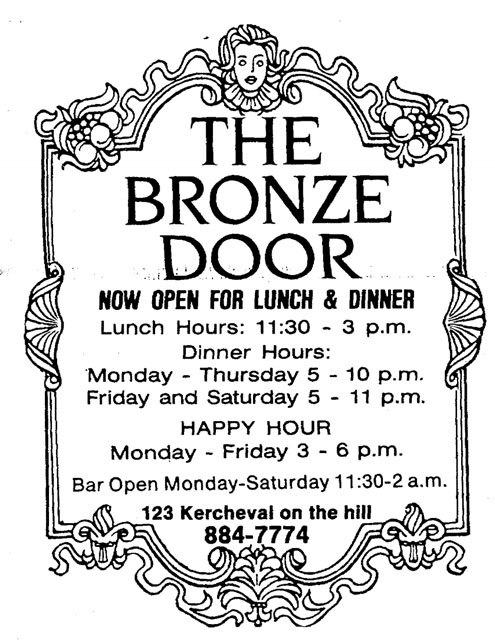 The 1980’s proved to be a busy period for the restaurant with a significant number of changes. In October 1985, the restaurant had been closed for a while and was in the hands of creditors. It is reported ‘officials at the War Memorial were trying to purchase the existing Class C liquor license that belonged to the restaurant – the War Memorial submitted a bid for $70,000 for the license’. Over the course of several months, it is apparent the War Memorial was significantly outbid for the license (by a newly formed corporation) at federal bankruptcy court, Nov 8, 1985. Three bids for the bulk assets of the restaurant were submitted. In March 1986, the ownership of the liquor license was transferred to the Hill Restaurant Corp. It was anticipated the potential new owners would open the restaurant soon. However, it wasn’t until November 1987, that the Grosse Pointe News reported the restaurant was about to be purchased, having been vacant for three years. Early plans submitted by the new owners suggested the old building would be torn down and a new 4,500 sq ft single-story restaurant with a lot of glass built in its place. Come January 1988, the new owner (Stanley Day, who resided in Grosse Pointe) presented his development plans to the Farms council. In May 1988, demolition had begun. The interior of the new building was designed by Ford and Earl Associates, who had designed ‘London East’, the restaurant that was formally on the site when it was owned by Al Green during the 1940’s. The new ‘neighborhood family restaurant’ was scheduled to open in November 1988, and was to be called One-23, taking the name from its address. The new building was to have a glass façade (as it does today) and a skylight running from front to rear. It was planned the restaurant would open from late morning to late evening, offering ‘contemporary American dishes that would be simple done, avoiding fancy embellishments’. More than 100 people attended the pre-opening. One-23 officially opened in April 1989. Image courtesy of: The Grosse Pointe News (1988). 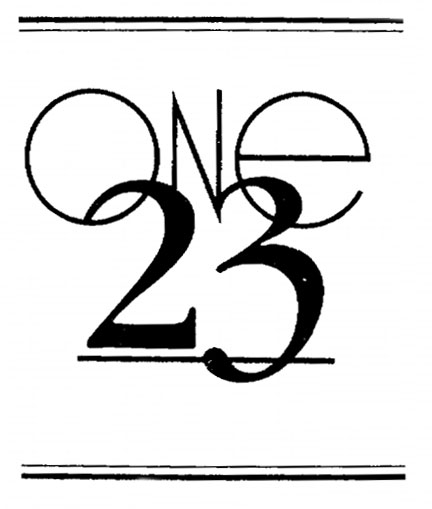 Post 1989, it appears the restaurant has undergone several changes of owner and to its name. After One-23 it was renamed Chianti, then Jimmy’s, and more recently The Hill Seafood and Chop House. Image courtesy of: The Grosse Pointe News. 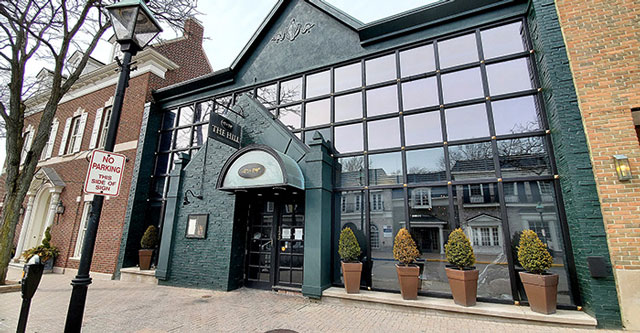 Fast forward to present day, 88 years after Joseph Vansinamee opened his beer garden in a small building, known as the Punch and Judy bar (in 1933), the restaurant has new owners. The name of the restaurant has returned to The Bronze Door – paying homage to the popular restaurant of the same name from the 1960’s and early 1980’s – concluding an incredible, historic, and fascinating journey. Images courtesy of: Katie Doelle. 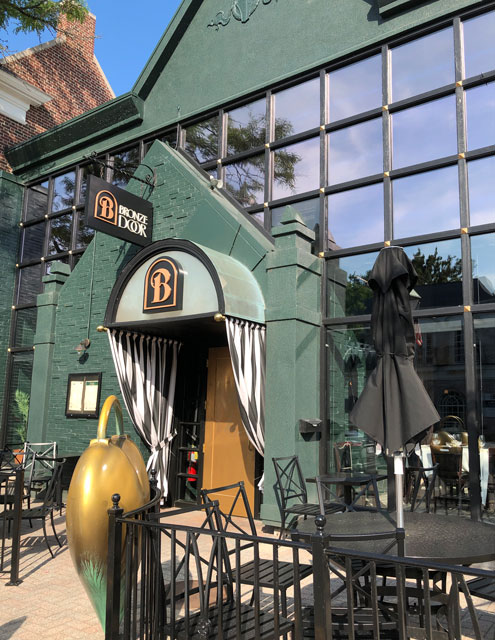