Last week we explored 15882 Lakeview Court, designed by renowned Detroit architect Gino Rosetti, in 1977 as his own residence.

This week we travel back to 1916, and to one of the earlier homes built on Yorkshire, number 1011. Ladue & Rahles designed the historic four bedroom 4,100 sq ft Colonial home for Edmund F. Poupard, a member of the respected Poupard family who owned one of the original ribbon farms that once lined the shores of Lake St. Clair that included the lot 1011 Yorkshire was built on.

The Poupard Family was extremely prominent, and, at the time, one of the most prosperous in the Grosse Pointe communities. Edmund, son of Charles and Mary Poupard, was born in Grosse Pointe, 1876, and died in 1961. His grandfather, Simon, was one of the organizers of the first volunteer fire departments in the area. His father, Charles, served as clerk for the Village of Grosse Pointe Park, and also as treasurer of the board of education for 31 years – the Poupard Elementary School is named after him Source: Grosse Pointe Historical Society.

Very little is known about the architects Howard A. Ladue & Felix A. Rahles. It would appear from the information we can find that they specialized in creating large residences in Metro Detroit’s affluent suburbs, many of which were center entrance Colonials, similar in style to that of 1011 Yorkshire. However, it is not clear if they designed any other properties in Grosse Pointe. They were also involved in creating a movie theater, in Pontiac, in 1915. 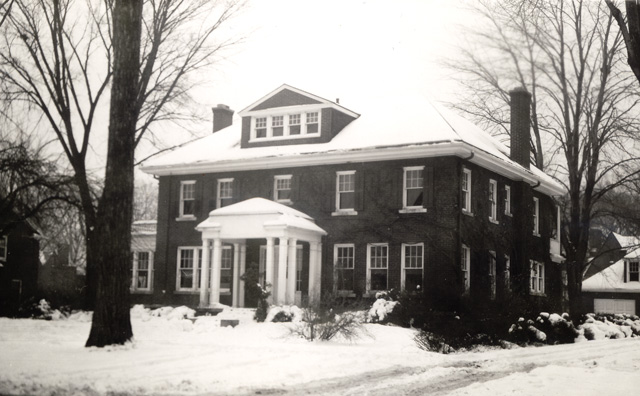 Yorkshire is one of the more prominent streets in Grosse Pointe Park. The original Poupard farm encompassed the land that is now home to the streets of Bishop, Kensington and Yorkshire. The area (that became Yorkshire road) ran down the middle of the lot.  According to research by the Grosse Pointe Historical Society the farm was ‘bounded by the lake on the south, Harper Avenue on the North, Bishop on the east and Kensington on the west.  Source: Grosse Pointe Historical Society. Prior to 1920, the Joseph Socier Farm was located on the east side of Bishop, while the Ambroise Tremble Farm (later changed to Trombley) extended the length of Kensington. In 1881, after the death of Genevieve Poupard, the Poupard Farm became the property of Charles L. Poupard and his wife Mary. It was subsequently divided between the various members of the Poupard family. In 1902 Charles Poupard died.

Post 1902 the Poupard Farm underwent a dramatic transformation. In 1904 the family sold part of the property for the building of Kercheval. Eleven years later, in 1915, the farm was sold to three land companies. Later that year the Berkshire Land Company acquired all rights to the land. Source: The Joseph Socier Farm: Bishop Road 1000 Block by Bruce L. Sanders.

In 1916, Edmund F. Poupard, who still owned part of the original farm, replaced what was the original Poupard farmhouse, with his new home, 1011 Yorkshire. At that point it was still surrounded by much open land that had yet to be developed – the adjacent homes 1015 Yorkshire and 1009 Yorkshire were not completed until 1927 and 1936 respectively, while the home directly opposite 1008 and wasn’t completed until 1923. A large number of the homes on Yorkshire were completed during the 1920’s in what was to be a remarkable period of development in the Grosse Pointe Park community.

It wasn’t just Yorkshire that was undergoing significant change. The 1910’s and 1920’s also brought the first wave of homes to Kensington and Bishop. However, by the 1930’s the Great Depression had hit Grosse Pointe Park hard. Homes were still being constructed, but the financial plight had had a serious effect on the builders and architects who were working in the area. Many homes, purchased during the 1920’s, were foreclosed, families had to move to homes they could afford (and rent their properties to others), while numerous properties sold for a fraction of their original price.

Today 1011 Yorkshire is an historic home. The Grosse Pointe Historical Society, in recognition of its historical and architectural significance to the community, recently awarded the property a Bronze Plaque…. it is thoroughly deserved.