This week we head to a property on one of the most distinguished streets in Grosse Pointe Farms, 110 Cloverly. Robert O. Derrick completed the majestic Tudor mansion, in 1924, for Phelps Newberry, a member of the esteemed Newberry family.

The Newberry family owned numerous properties in the Grosse Pointes. Phelps Newberry’s grandfather, prominent local political figure John Stoughton Newberry, resided at “Lake Terrace”, 99 Lake Shore Drive (now demolished). During the latter part of the 19th century John Stoughton Newberry, along with his business partner James H. McMillan, had a huge impact on the industrial growth of Detroit, along with the residential growth of Grosse Pointe. Phelps Newberry’s father, Truman Handy Newberry, resided at “Drybrook”, 123 Lake Shore (now demolished), he was president and treasurer of the Detroit Steel & Spring Company, former secretary of the navy, and a senator.

Phelps Newberry was also a noted figure in his own right. He was born in 1891, and graduated from Yale, in 1914. Early on in his career he held several positions at Detroit steel companies, before taking a senior position with the Guardian Detroit Bank. Mr. Newberry served during both World Wars, holding the position of Colonel in the air force. In 1916 Mr. Newberry married Christina Muir, and together they had three children.

110 Cloverly is an opulent 9,567 sq ft Tudor style mansion, completed during the architectural boom that dominated Grosse Pointe Farms during the 1920’s. It is filled with an array of architectural details including arched doorways, seven elaborate fireplaces, and a wonderful display of carved wood. The intricate carvings are present throughout the home, over doors, fireplaces, and archways. Based on an article in the Detroit Free Press, by Judy Rose, we understand many of the carvings feature mythical faces, and creatures, grapes, flowers, leaves, flourishes, along with personalization in the form of an “N” for Newberry. Some of the most exquisite examples of the carvings can be found in the living room, and dining room, which also contain detailed plaster ceilings. The Detroit Free Press article describes the ‘carved quadrants on the dining room ceiling, each having a different center flower’. The paneled walls of the large 15’ x 28’ sq ft dining room have carved faux pillars, each with detailed carving within the pillars’. The 20’ x 33’ sq ft living room ‘is wrapped at face level with panels in the familiar linen-fold design, including the area above the fireplace. There are four different arches with detailed carved plaques over them’. Source: Detroit Free Press article, by Judy Rose. The library is also beautifully designed. The wood and stucco section on the wall, leading to the hallway, compliments the beamed ceiling.

In the hallway, a wrought iron staircase leads to the second floor, which features seven bedrooms, the largest of which is 19’ x 25’ sq ft. There are three additional bedrooms for maids, along with two further bedrooms on the third floor. Also on the second floor is a 16’ x 9’ sq ft walk-in linen room with more than 100 shelves. Photos are courtesy of Realtor.com 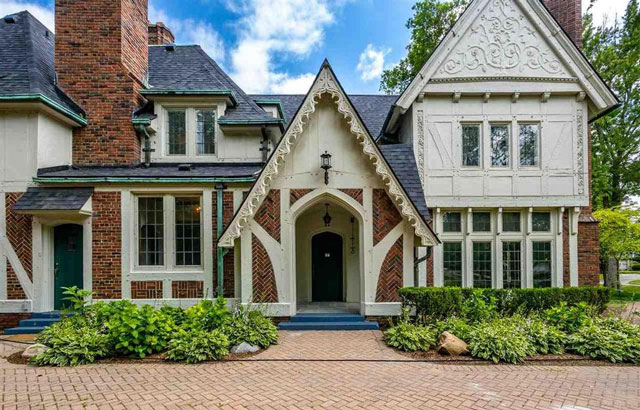 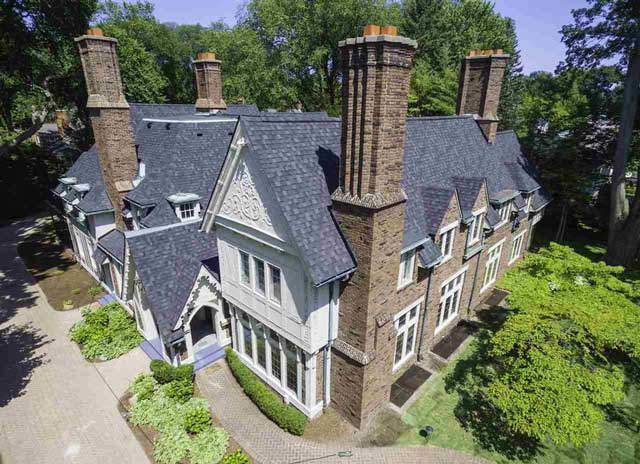 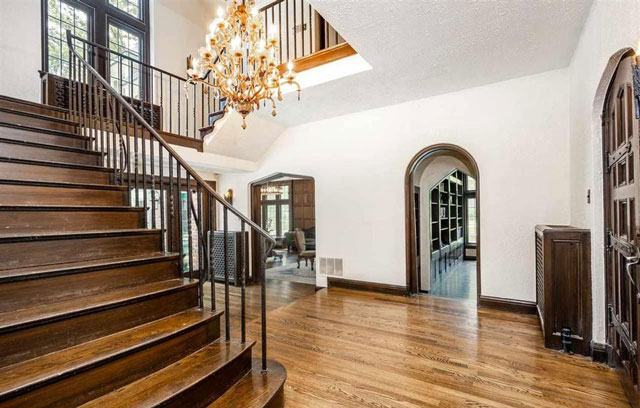 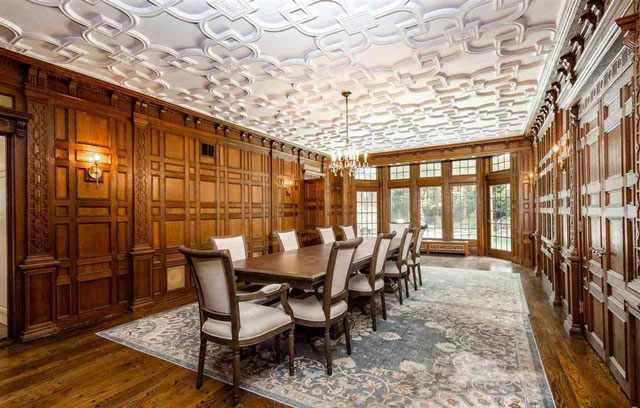 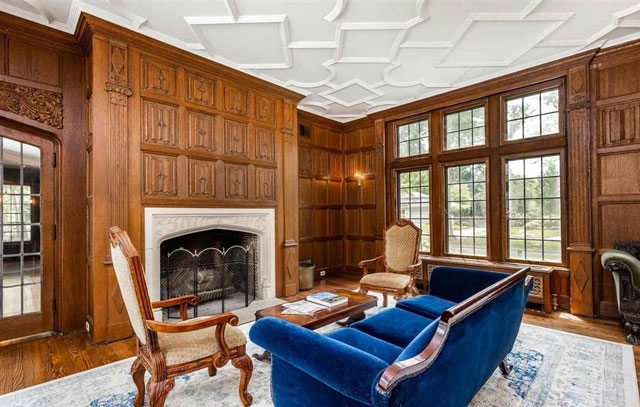 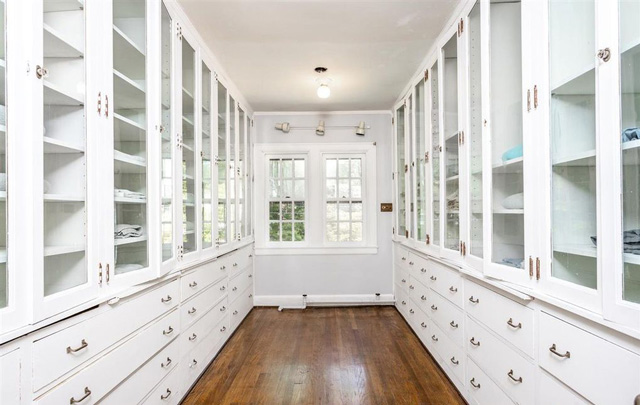 The exterior of the property is just as decorative as the interior. The brick built home features the classic timber, stucco section, one would expect to find with any grand Tudor residence, but there are also some wonderful carved elements on the triangular shaped entranceways, along with the beautiful plaster work above the main window on the second floor. The photo is courtesy of Katie Doelle, the historic photo is courtesy of the Digital Collections, Detroit Public Library. 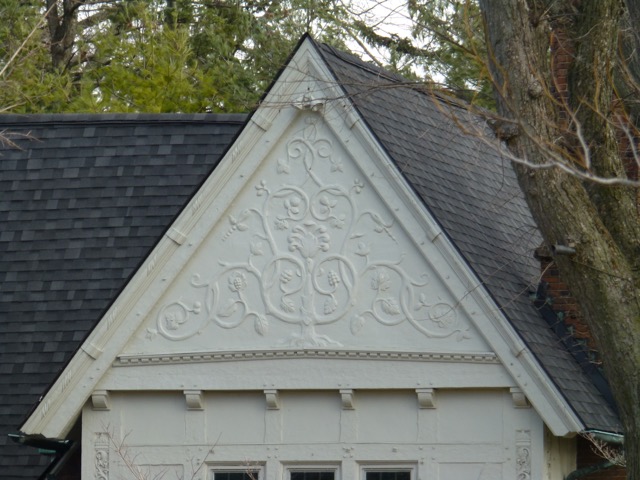 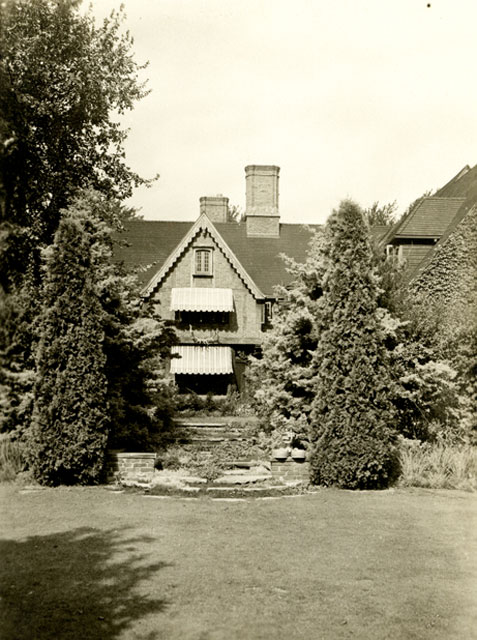 It is not clear how long the Newberry family resided at the property. Phelps Newberry passed in 1949. In the subsequent years the property fell into disrepair, but the current owners have lovingly restored the home to its former glory.

This grand mansion was designed by one of Grosse Pointe’s most prominent architects Robert O. Derrick. With over 25 buildings to his name in the Grosse Pointe communities Derrick was a prolific architect responsible for many superb homes, school buildings, the ‘Little Club’ along with the Grosse Pointe Farms water filtration and pumping station. Much of Derrick’s work in the community occurred during the 1920’s, embracing a range of architectural styles, and displaying superb attention to detail. The majority of his commissions were large residences for prominent clientele who were looking for ‘spectacular’, and for something ‘a little out of the ordinary’.

Derrick created several properties on Cloverly, including the neighboring residence, 111 Cloverly, which he completed that same year, in 1924, for Hugh Ledyard, secretary and treasurer of the Art Stove Company of Detroit.

The street of Cloverly is filled with classically designed homes, showcasing the work of some of Detroit’s most talented designers who worked in the community during the latter part of the 1920’s. 110 Cloverly, in particular, can be described as a sheer work of art.

I would like to take this opportunity to wish you Happy Holidays and a very happy and healthy 2020! Historical Architecture of Grosse Pointe will return on Tuesday, January 7th with lots more historic stories. 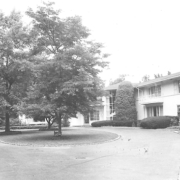 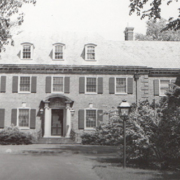 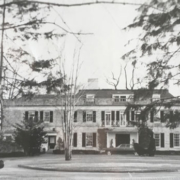 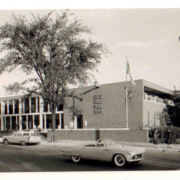