Last week we presented 176 Fisher, designed in 1939 by Clarence Mack – one of the nationally noted architects who came to the community to work on one project.

This week we return to Windmill Pointe, and to one of the lost mansions. Unlike many of the grand mansions built in the 1920’s, that were razed to create new subdivisions, this stunning property was sadly lost to fire in the 1990’s.

During the 1920’s Windmill Pointe was the height of popularity, and became a much sought after area. Wealthy Detroiters and professionals had begun to select the location to build magnificent residences, hiring some of the area’s most prestigious architects to design their new homes. One such designer was J. Ivan Dise who completed 15600 Windmill Pointe in 1929 for John Walter Drake, former President of the Hupp Motor Car Company.

J. Ivan Dise created close to 20 homes across the Grosse Pointe communities including the City of Grosse Pointe Farms sewage pumping station (located at Chalfonte Avenue and Kerby Road). He was born in Pennsylvania in 1887. After graduating from the University of Pennsylvania in 1909 he began his career in New York with the prestigious firm of Cass Gilbert. During his time with the firm he worked on several commissions the company had secured in the City of Detroit, including the Detroit Public Library and the Scott Memorial Fountain on Belle Isle.

In 1919 Dise moved from New York to Detroit to join the architectural firm of Albert Kahn. After working with Kahn for three years he set up his own firm, and worked on many civil and residential projects within Metro Detroit including: the Methodist Children’s village, the Boulevard Temple Building, numerous Detroit Public Schools and multiple residences. The majority of his work in Grosse Pointe occurred during the 1920’s and 30’s including three collaborative projects with fellow Detroit architect Clair William Ditchy. Dise’s houses are some of the most attractive in the area.

15600 Windmill Pointe was a large English manor house located on a triple lot. It was constructed from solid masonry and stone with a slate roof.  The main floor features a huge two-story living room (23’ x 40’ sq ft) with a cathedral ceiling; a 17’ x 26’ sq ft wood paneled library, a 17’ x 23’ sq ft dining room along with a 21’ x 40’ sq ft solarium with an adjoining slate terrace overlooking the lake. As the floor plan below demonstrates a long narrow gallery ran the full length of the 1st floor. The second floor included a balcony (that’s overlooked the living room), a 17’ x 23’ sq ft master bedroom, sitting room along with 3 additional bedrooms, and four smaller bedrooms for maids. The third floor contained two further bedrooms, while the basement featured two recreation rooms and a workshop. 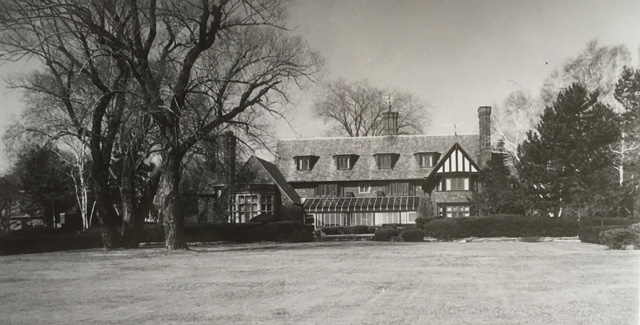 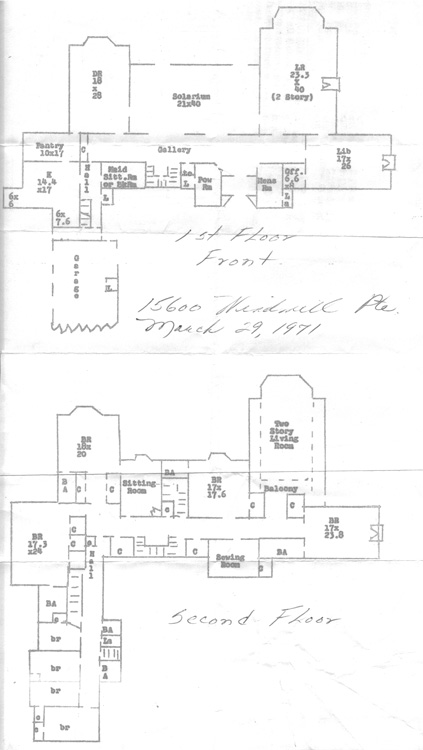 John W. Drake commissioned 15600 Windmill Pointe. Mr. Drake was one of the four original investors of the Hupp Motor Car Company, which was organized in 1909. Sales of Hupmobiles were instantly successful; the company built 5000 cars in 1910. Drake held the position of president until the early 1930’s. Prior to moving to Windmill Pointe Mr. Drake resided in a large 10,000 sq ft house (650 E.Boston Blvd) in the Boston-Edison District, Detroit.

At some point, prior to 1970, another former resident of Boston-Edison, Carl Breer, purchased 15600 Windmill Pointe. Mr. Breer (born in 1883) was an automotive industrial designer. Along with Fred Zeder and Owen Skelton he was one of the core engineers that formed the present day Chrysler Corporation. He also headed the engineering and research department, a post he held until 1949. Mr. Breer passed in 1970, and was inducted into the Automotive Hall of Fame in 1976. Source: Wikipedia. After Mr. Breer’s death the house was listed for sale, in 1974, for $390,000 (around $2m today).

Around 1996 the house was badly damage by fire and was subsequently demolished. A new home was built on the lot that same year.

The original 15600 Windmill Pointe was unfortunately another grand mansion on the Pointe to be lost to fire – the Charles P. Helin home, 15440 Windmill Pointe, was destroyed in 1978. These homes may be gone, but many people still remember their beauty. 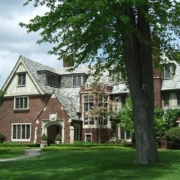