Last week we presented 1 Donovan Place, completed in 1916, by George D. Mason, for Fremont Woodruff. The superb French styled home is situated next to the lake; the original address of the residence was 17160 E. Jefferson.

This week we are going to introduce you to 487 Rivard, Grosse Pointe City. Esselstyn and Murphy completed this superb clapboard colonial style home, in 1919, for Bernhard Stroh Jr., former president of the Stroh Brewery Company.

Rivard, named after the Rivard family, one of the earliest French farmers to settle in the Grosse Pointe region, was heavily developed in the early twentieth century. Many of the older homes on this prestigious street were constructed between 1918 and 1922, having been designed by several leading architects of that era. The earlier homes, built around 1918 were predominantly clapboard colonial architecture. It is this particular approach that is the style of 487 Rivard, arguably one of the nicest examples of this architectural style in the community. 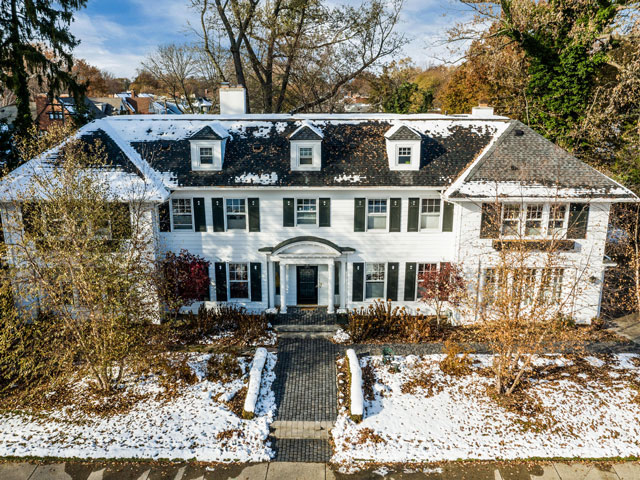 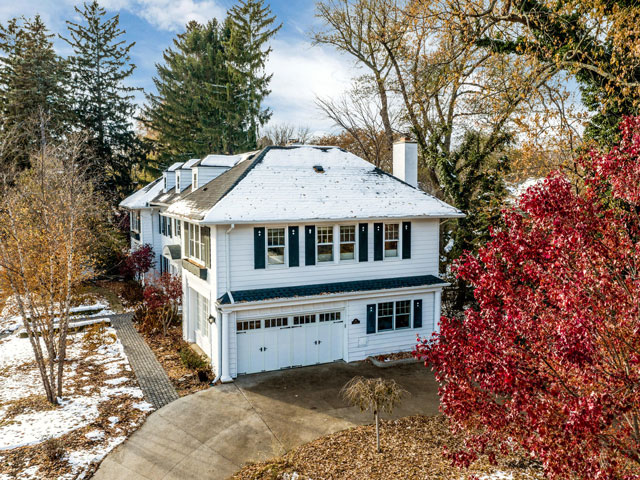 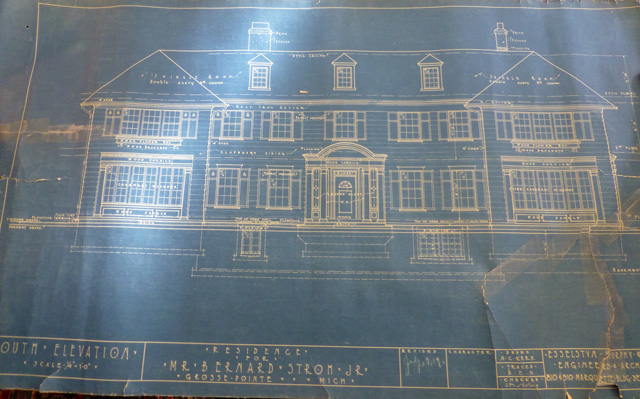 Completed in 1919, 487 Rivard has only had four owners. It is a house filled with family history, interesting stories, and magnificent architectural details, much of which is original. The grand 6,299 sq ft residence is located on a large lot that runs the entire width of St Paul, from Rivard, to University Place. The exterior of the imposing three-story symmetrical home was, and still is, white clapboard. The front elevation features an abundance of large windows that allows a huge amount of light to filter through the home. On entering the property the glorious marble floor, in the 17’ x 12’ sq ft hallway, is a traditional black and white checkered pattern. The entrance also features numerous decorative elements, including detailed moldings, and a striking curved staircase with a stunning leaded glass window. 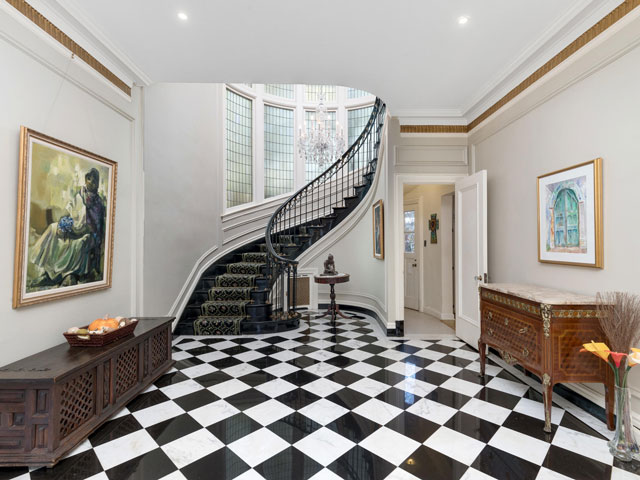 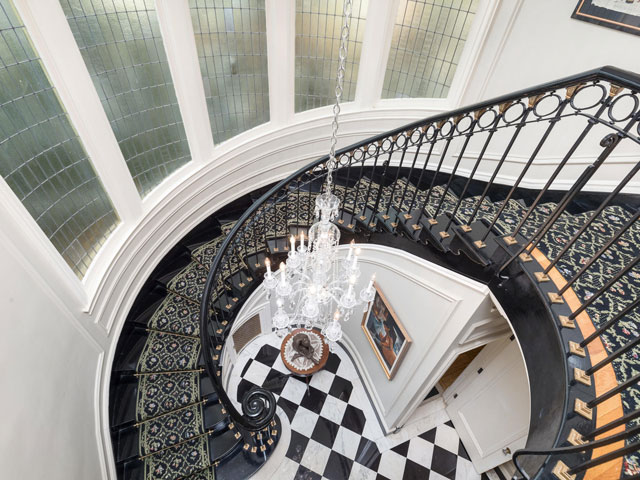 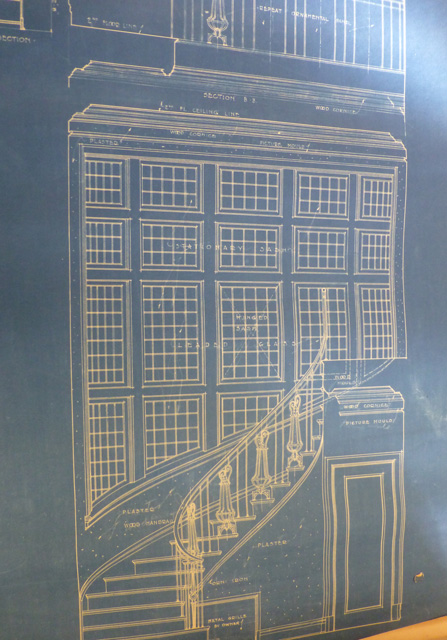 On the main floor there is a spacious 18’ x 15’ sq ft wood paneled dining room, a spectacular 28’ x 13’ sq ft kitchen, which includes a natural fireplace, along with a 28’ x 15’ sq ft living room with splendid blue Pewabic tile around the fire place. The current owner of the home revealed a hidden trapdoor in the floor of the living room. She believes this was used during prohibition when the Stroh’s held parties, and, if needed liquor could be lowered into the basement to ‘get it out of the way’. On the left hand side of the main floor is an expansive 27’ x 18’ sq ft sunroom, with access to the garden. 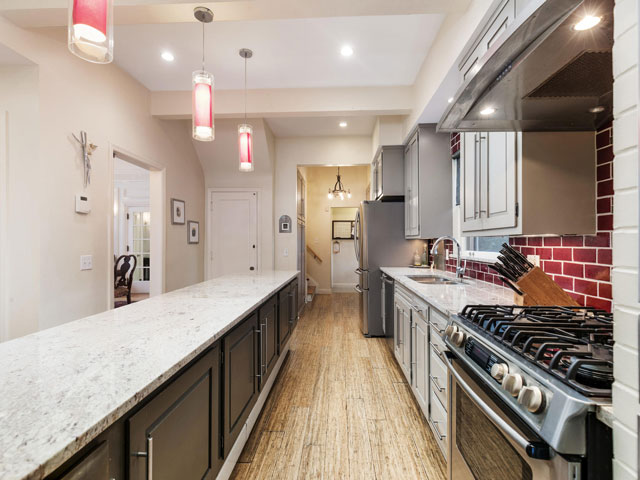 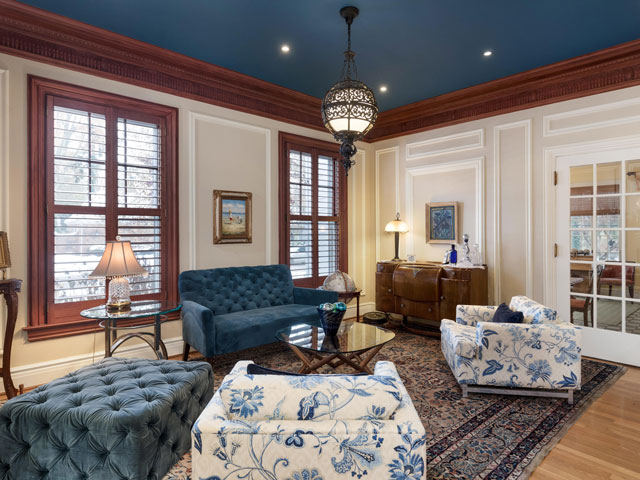 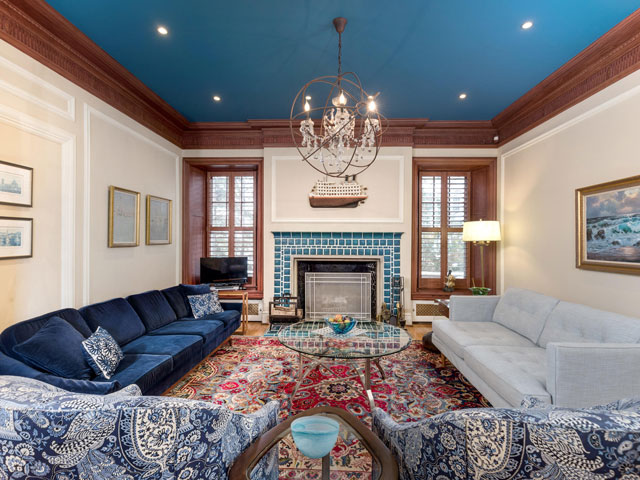 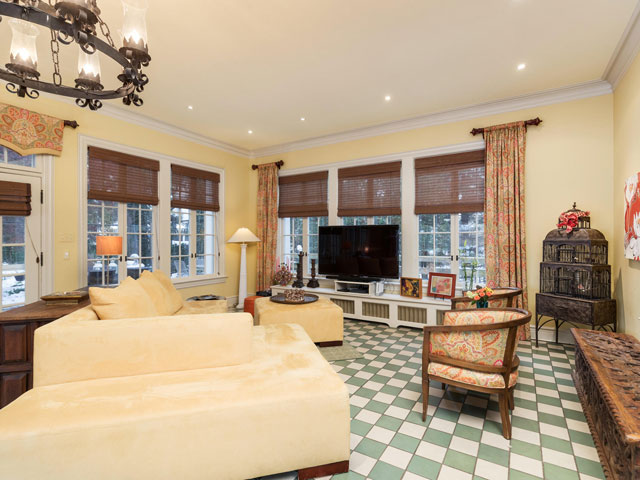 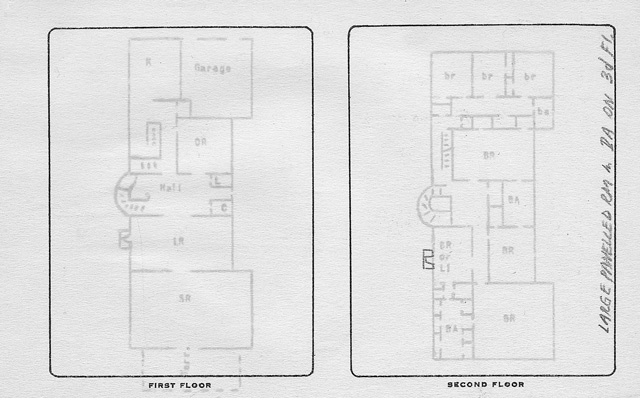 The second floor currently contains six bedrooms. At the time of completion internal doorways, which could be locked from the inside, connected four of the bedrooms. The maid, and the live-in cook, had their own quarters – three small bedrooms of their own, along with service stairs. The maid could also access the far bedroom from the hallway. The 3rd floor was originally designed to contain a ballroom, however the space has subsequently been converted into a large playroom (as per the description, of the third floor, in 1936). The butler’s room was also located on the third floor, which contains a number of cedar closets.

The current owner’s have decorated the home beautifully. They have kept many of the historic elements, and complimented these original fixtures with an eclectic mix of art deco, mid century modern, and Victorian styled fixtures and furniture. The family was also responsible for re landscaping the garden, and restoring it to its former glory.

The original owner of the home Bernhard Stroh Jr. was the son of Bernhard Stroh, who established the Stroh Brewing Company in Detroit, in 1850, having immigrated to the United States from Germany. Mr. Stroh Jr. was born in Detroit, in 1884. He married Alice Kratzet, in 1917, and together they had three children. Having graduated from the University of Michigan, and employed by several companies, he then joined the family brewing company as vice president. After his father passed, in 1916, he became president. The company, already successful, grew dramatically under his watch. By 1920 sales had nearly reached $3m dollars, which ultimately lead to the Stroh Brewing Company, in 1982, becoming the third-largest beer-maker in the U.S. Source and image: The City of Detroit, Michigan, 1701-1922, Volume 3, by Clarence Monroe. 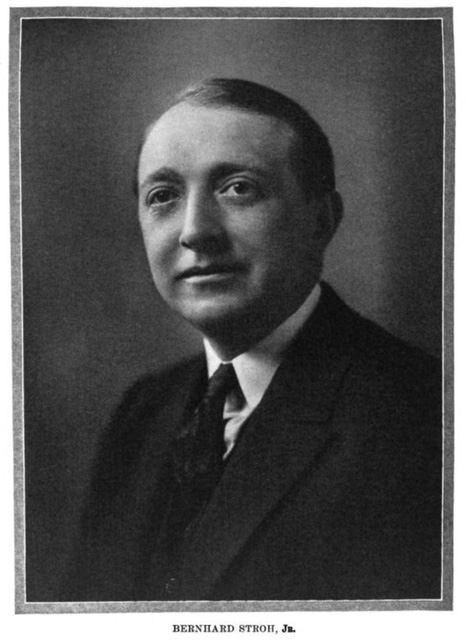 In 1936, with his three children going away to school, it appears, from our files, Mr. Stroh planed to sell the house to move to a smaller property. He wanted around $40,000 for the home, but also considered renting the property, for $300 a month unfurnished (around $5,500 a month today). The family ended up owning the home until 1961. Bernhard’s eldest daughter, Joan resided in the house for at least 30 years. Joan told us that she loved the house, the staircase in particular. Now aged 101, Joan Stroh Sibley still resides in Grosse Pointe, on Vendome.

The architects of 487 Rivard, Esselstyn, Murphy & Hanford, Engineers & Architects, created several homes in Grosse Pointe, including two further clapboard Colonial style residences on Rivard – 497 Rivard (1918) and 502 Rivard (1919). The firm also designed 329 Grosse Pointe Blvd, a beautiful Italian styled home, in 1922. Horace Esselstyn, an engineer, would later go on to partner with Raymond Carey (from 1924 – 1929). Together they completed a number of prestigious homes in the Grosse Pointe communities, along with the Belle Isle Bridge.

We would like to thank the homes current owners, Dan and Georgette Dulworth, for allowing us to tour the home, and for sharing its historical past.